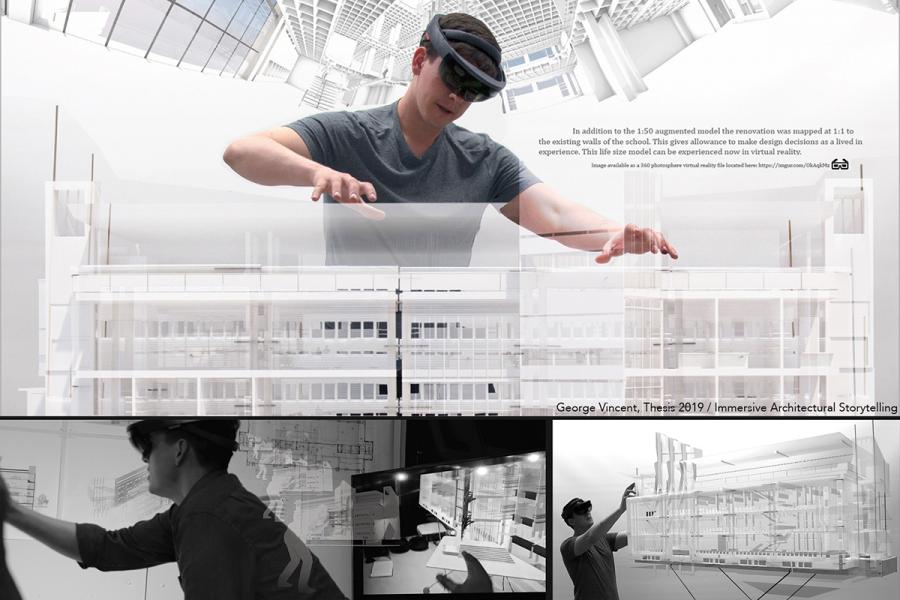 We, humans, have a tendency to evolve. And, this tendency only makes everything easier for us. From farming to architecture, what we had a century ago, is miles better than what we have evolved into now. The 21st century is the era of technology, and every possible domain is related to it directly or indirectly.

Architecture and technology go hand in hand. Moreover, both of them inter-relate so much that we can’t imagine either one without the other. We have come a long way, from using basic tools to meet our construction needs to now use high-tech machines. But again, we tend to evolve, and to justify that, we can’t stay still. So, here is a list of the top five representations of technology on ArchiVerse in the field of architecture.

Artificial Intelligence, attributed to AI, is the tech of the future. Remember Jarvis from Iron Man movies, well, that is a prime example of AI. It is the simulation of human intelligence in machines. That means machines can ‘think’ like human beings, and even solve problems!

Now, what does that mean in our journey of architecture? Well, as an example, it means that the machines we use to design a blueprint will independently find flaws in it, and even suggest improvements! Clearly, there can be even more implementations of this tech for our architecture, and that secret lies in the future.

These marvels of technology are achieving a lot of buzz since their launch. 3D printer, as the name suggests, is a printer that can print 3D objects, as programmed. Similarly, you can now define a 4D printer. A major difference between these two is that a 4D printer offers more depth immersion and detail, which is something an architect can appreciate.

These devices can be used to carve seemingly impossible structures much easily. You need to use software to command the printers, and they will deliver the same structure as commanded. A 3D and a 4D Printer would take much less raw materials and would create details that are hard to achieve by hand. So, we can increase efficiency, and that too with lesser expenditure!

3. The World of Augmented Reality:

Augmented Reality, abbreviated as AR, is another gift of technology. Its potential is so vast, that Apple decided to put a dedicated LiDAR sensor (which helps with AR) in the iPhone 12 Pro Max and the iPad 2020. Although, we have not yet reached the peak of this tech, which still makes it a gizmo, we are walking towards it. AR is an amalgamation of technology and the real world, and it helps to see hypothetical things (recorded through camera or sensor) in the real world surroundings.

Did you play the Pokemon Go game? It is a perfect example of AR. Various Snapchat filters make use of this tech too. But, now let’s see the architectural representation of AR. AR can be used to showcase a prototype construction of a building in a 3D structure to your team and clients. This will make it easier for them to analyze the details more. Further, they can even interact with it, zoom in or out, for instance. Moreover, the LiDAR sensor in the iPhone 12 can also measure the height and distances of objects, which is another amazing application of this tech. Clearly, with more research, we can explore more advancements of AR in architecture.

Now, a hologram is another step forward from AR. A hologram is a 3D (or even 4D) representation of an object in the real-time world, without depending on a screen, like we do in AR. That is, you need a screen to display a model in AR, but you need projectors in the case of holograms. Although it was coined in 1948, this technology hasn’t reached a lot of practical applications yet. But, it holds a ton of potential.

As explained above, holograms are images that you can interact with, without any intervention of a screen. You can see ample applications of this gizmo in some sci-fi movies. By creating a hologram model, architects can analyze deeply, and look into flaws of a build deeply, and at much more efficiency, without building anything at all. This technology can help to avoid constructional failures, and will also let anyone be more clear of their ideology.

Considered to be nothing more than just a beam of coloured light by many, a Laser is much more than that. Scientists are continuously working on finding more applications of this technology, and it is going places! Lasers are now being used in the medical field, big industries, and even warfare.

A laser is a wonderful tool when it comes to architecture. We do not know everything about it, so its use is limited to specified areas. But, when it comes to cutting, nothing can beat the precision of a laser. It is further used in welding, drilling, and even cleaning! It is such a package of tech, that its applications are way more diverse than we can expect. Positively, many more representations of this technology are yet to be found in architecture.

So, these are some of the many representations of technology that we can expect in the future of architecture. All of these are in development stages, and who knows what more we can expect from them! But, one thing we can be sure of is that the future of architecture is going to be magnificent with them. Which one of these technologies is your favorite? Do let us know in the comments. Also, make sure to keep visiting us for more such content on architecture.

Best laptop for Architecture students in 2021

What is 3D printing technology? How it is used in Architecture?

The Best Designing Software That Every Architect Must Use

Get all latest content delivered to your email a few times a month.